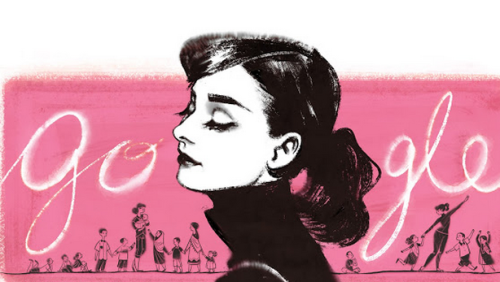 It’s Audrey Hepburn Day. No, that’s not official. But today, May 4, is Hepburn’s birthday and in 2014, on what would have been her 85th, she got her very own Google Doodle. Now a Vancouver film critic named John Lekich is proposing we declare it her day permanently. And no less an authority than the Two Bossy Dames are calling today #MayTheAudrey in Twitter.

Not least because no one wore pearls quite like Audrey.

I saw Breakfast at Tiffany’s for the first time when I was about 15 and I remember thinking, “Why does no one make necklaces like that any more?”

Of course, I completely overlooked what she did to pay for those pearls. But the idea of bold, beautiful statement necklaces stayed with me, and years later I began designing them myself.

My sons might disagree, but I think Audrey film lovers have at least as much claim on the day as the Star Wars fanatics. Although they do have the best pun – May the 4th Be With You.

And I particularly like Mr. Lekich’s proposal for how we should celebrate Audrey Hepburn Day. By going window shopping at lunch, buying flowers, and being extra kind to everyone.

I would add that today we should wear pearls. But then, I always think that.

Learn about new items first! Sign up for our newsletter.

We respect privacy and will never sell your address.